When Centerling Ferran’s birthday was approaching, his classmates of the Class of Spring 2016 were looking for a fun gift. Everybody loves Looping Louie, a game created for small children, and more frequently put to different use by partying students. As innovators, the newest class believed there was yet room for improvement. With zero hesitation, they cancelled their plans for Saturday, and started hacking. It resulted in upgraded Looping Louie with 3D-printed extensions to feature eight players, a changed motor to run at different speeds, and included a “random mode”. Great present, great CDTM spirit! 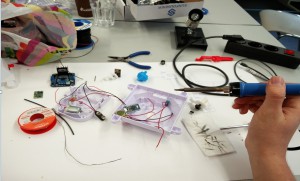 Straight out of the box, the original Looping Louie’s electrical hardware is pretty basic: one switch connects a battery to the motor that launches Louie into flight – the only feature is the ability to turn the switch on and off. Since Hasbro designed the game for children, it required some more engineering to completely meet the needs.

Some basic reverse engineering by unscrewing the base revealed the old electric circuit. They sketched out the brand new and greatly improved circuit diagram and tracked down the electrical parts while some did the all important task of placing the Looping Louie stickers (beloved by small children, and them…and us)

They then screwed in a potentiometer (think, volume knob) and had an Arduino Pro Micro microcontroller board which read out angles for Louie’s newly updated knob. The angle value then went to the motor driver, which luckily had just arrived from the Conrad shopping trip.

With a little handiwork they made space for a 9V block battery. With significantly more power than the original 3V battery, Louie had a reason to wear its pilot goggles.

The first stage was done: by turning the knob they could throttle down Louie, speed it up and even make it go backwards.

The Arduino microcontroller board provided endless possibilities, so there was no reason to stop at custom speed control. They installed a new switch to change to a new game mode, which they called ‘crazy mode’. The Idea: the motor speed changes at random intervals, to random values. To make it more playable, they made forward motion appear more often than stopping and going in reverse mode. The 10mm Jumbo LED blinks slowly to show the mode quickly and to signal an upcoming crazy change of motor speed. See how this looks in this image.

Making it for many

What’s more fun than four players defending their chickens? Eight players! A quick peek at thingiverse.com shows that they were not the first ones to think of that. There’s an adaptor model, ready to be easily downloaded, and printed on the Makerbot Replicator Z18, which Martin Giese recently gifted to the CDTM. The prints were, in fact, beautiful! Using the arms from another Looping Louie box, they extended the game… and it looked great!

They were almost done. All that was left was adding more capacitors which resolved some problems with voltage drops on quick starts. But much more importantly, they rebranded the game to a more fitting name: The Circling Centerling.

The code is on GitHub here, so feel free to contribute!