The Urban Informatics Research Lab at the Queensland University of Technology is one of CDTM’s partner programs for a semester abroad. Some of you might wonder, What is Urban Informatics? Urban Informatics is at the intersection of people, places, and technology. By definition it is an interdisciplinary field drawing from many fields, including computer science, design, and sociology.

Located in sunny Brisbane, Australia, the UI Lab offers a wide variety of research topics ranging from urban mobility to community engagement and safety in the city, just to name a few. For this reason, the UI Lab can be the perfect abroad option for just about anyone.

This was certainly the case for April, Class of Fall 2014 and a Neuro-Cognitive Psychology master student. April joined the Urban Informatics Lab last October to work on the “Risky Gadgets to the Rescue” project led by Dr. Ronald Schroeter and Fabius Steinberger (Class of Spring 2011). 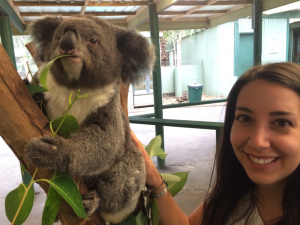 The Risky Gadgets project aims to use smartphones, which are considered risky yet are often kept (and used) in cars, to reengage drivers and help them focus on driving. The researchers specifically target young male drivers because they have the highest crash rates and the most risky driving behaviors. One explanation for this pattern is that young males tend to become bored more easily. Then, they engage in risky driving behavior to alleviate the negative feeling of boredom.

To solve this problem, the Risky Gadgets team is developing a smartphone app to be used in the car while driving. They hope to encourage bored drivers to refocus on the driving task by making driving more engaging.

April contributed to the latest iteration of the Risky Gadgets project by researching and recommending biometric devices to be used to monitor physiological signs of boredom. She also conducted a thorough literature review on boredom and contributed to a number of research papers.

Toward the end of her stay, April and two other members of the team conducted an experiment in the desktop driving simulator using an eye-tracking device and a heart rate monitor to investigate drivers’ behavior while using the smartphone app.

It wasn’t all work and no play, though. Brisbane is a thriving cultural city and is perfectly located for beach-lovers, surfers, hikers, and explorers.

The Risky Gadgets team is currently looking for an intern starting in August 2016 to help them further develop the driving app and assist in the final iteration of the experiment. If this project has captured your interest, contact the CDTM Abroad team, abroad@cdtm.de, for more information or to apply.